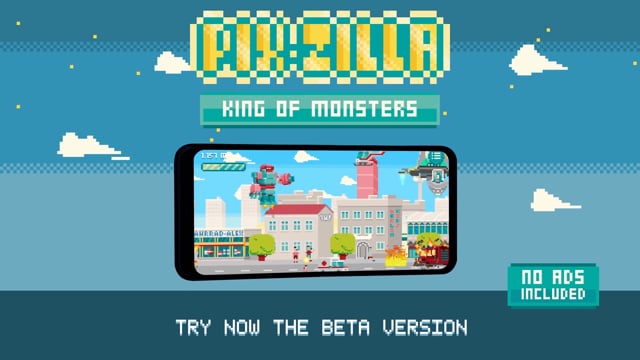 It’s great arcade game in retro style. Graphics, gameplay and other features meet all the requirements of old school fans. The main character will be a huge robot, which was created to save the city of the future from numerous misfortunes and troubles that fell on him. Here and bandits and aliens and other factors that usually terrorize the citizens. Players gained control of the combat unit will go to destroy everything that at least as it may pose a threat to the population. Non-stop battles, a variety of opponents, dangerous situations, improving the steel character, as well as much more will please fans of the genre.

We did this trailer to promote our last game, this retro pixel art shoot ‘em up and Run&Gun inspired in the arcade games from the ’80s.

Try the beta at:

Pixzilla is out of control, created by the Professor to finish with the corruption of Techno City.

Pix-Zilla, the king of monsters, is a 2D shoot ‘em up game with 8-bit retro pixel aesthetics, inspired by great 90’s movies and classic video games of the run and gun and shoot ‘em up, fully adapted to be able to control it with just two fingers on your phone and be able to play it anywhere.

The professor has created Pix-Zilla to end the corruption of the city of Techno City, a city devastated by aliens invasion. Pix-Zilla will have to finish all the enemies while trying to survive in the race until the final bosses.

Pix-Zilla has all these features:

– The possibility of creating chaos in the city destroying everything in your path.

– The possibility of climbing on top of buildings.